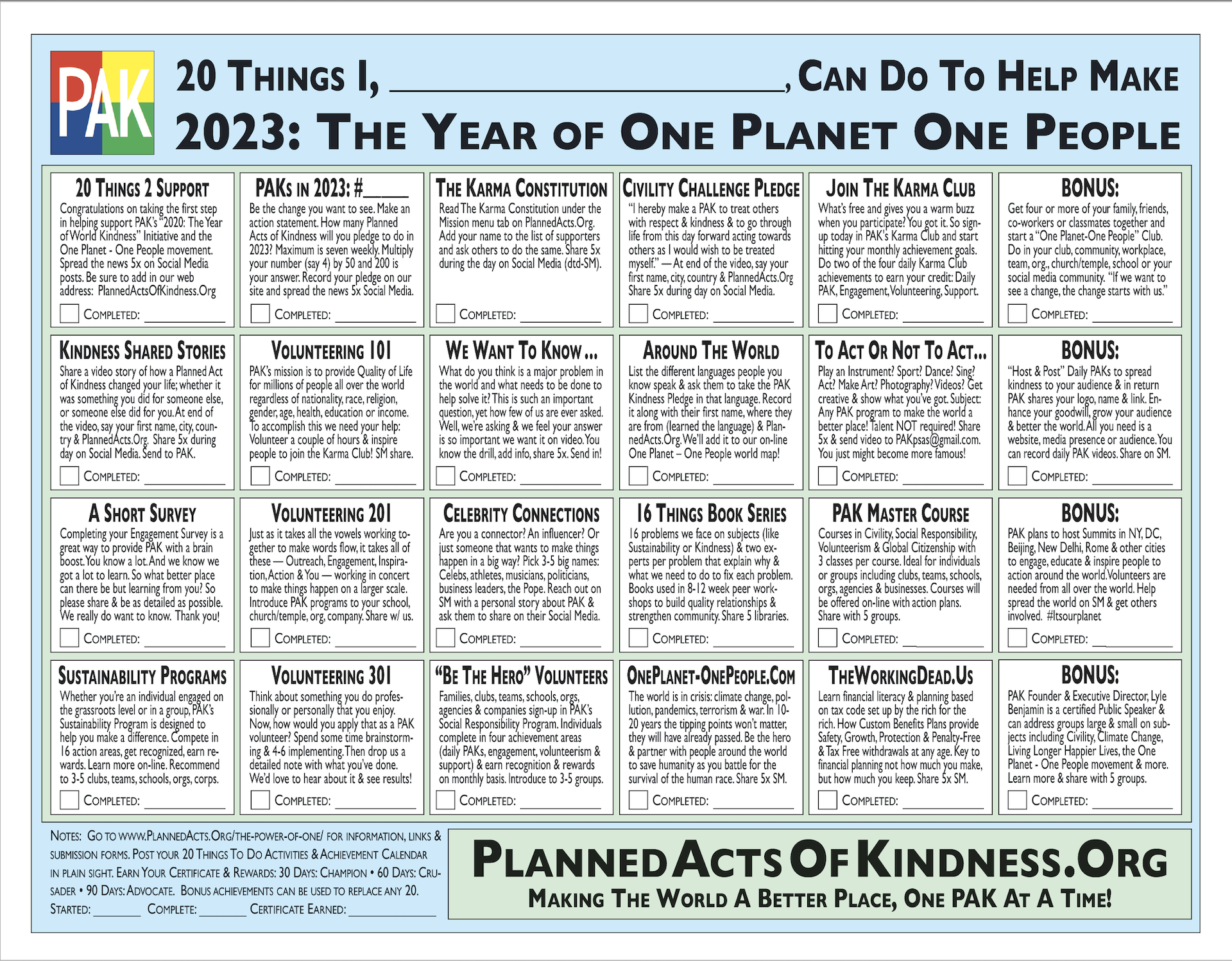 The More You Do, The Greater You Rewards. 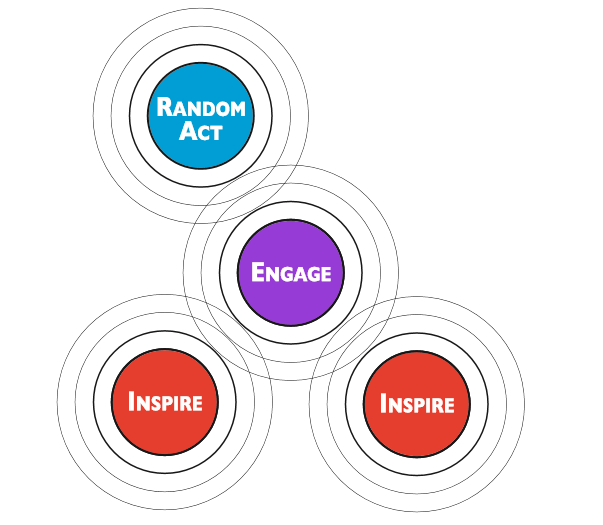 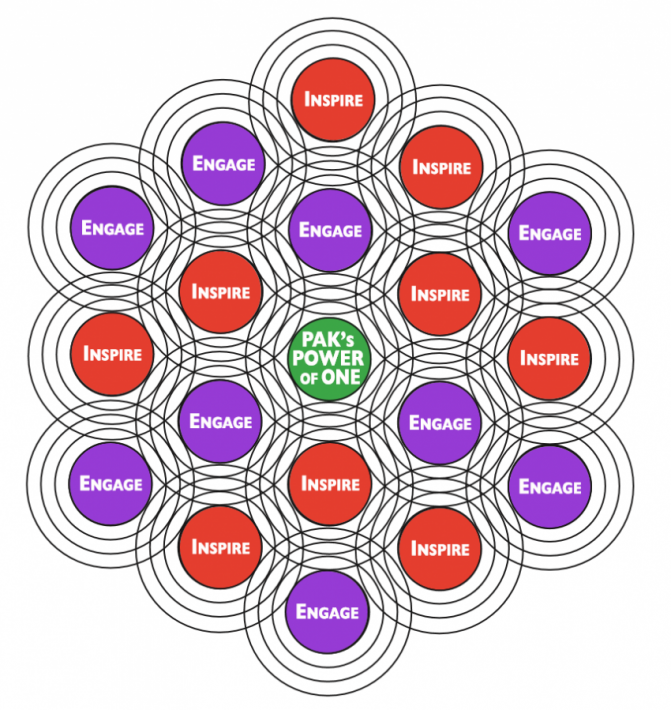 “Kindness & the “One Planet-One People” Movement

Kindness takes on many forms. In human interaction, it’s the compassion, empathy, respect and civility we need to show each other regardless of our differences. On a more ambitious level, it’s those same qualities that we need to employ in our interactions with other species, other ecosystems, and the planet itself.

We have one planet, and we have one people on the planet. It’s that simple. And it’s important that we all start acting like we get it — even if we don’t yet fully buy in or think we can make a difference. At the minimum our own Quality of Life demands it and our survival as a species might very well depend on it.

The Power of One

Think of it this way, we all know how a Vicious Cycle works:  It’s a repeating situation or condition where one problem causes another problem that makes the first problem worse.

Keep this in mind: The more daily activities you do, the more others will join the Karma Club and participate.  The more people we have participating, the faster we can change the climate of the planet, both figuratively and literally.

There are four major areas of kindness that set the foundation for obtaining a more peaceful, harmonious world:  1) Civility; 2) Social Responsibility; 3) Volunteerism; and, 4) Global Citizenship. And what’s great about these foundation areas is that you’re doing one Planned Act of Kindness but you’re getting a multiplier effect: impacting two or more foundation areas from the same act of kindness.

The Power of One

This is why we talk about the Power of One. Your power. How the acts you do have a ripple effect and your influence extends out from you in waves. One occasional drop is why random acts of kindness doesn’t have much of a lasting impact. The impact is often localized and dissipates over time, and it’s hit or miss whether enough people pick up the ripple and start their own.

Think of Planned Acts as a faucet with a constant stream of drips and the Earth is the bucket underneath the tap. One drip is like adding water into the ocean. But what about a steady flow of drips that multiple and merge with others to form a stream, a river, a tsunami in an ocean? That’s the Power of One.

Register For the Challenge

Can you do all 20 PAKs in 30-Days? Do you have what it takes to be a PAK “One Planet-OnePeople” Champion? Take the challenge and “Be The Hero” to your family, friends, co-workers and local, national and global communities.

Don’t complete all 20 in 30? No worries. You’re automatically in the 60-Day Challenge completing for your place in history as a Crusader.

“The More You Do, The Greater Your Rewards”

And the good work that you do deserves both acknowledgement and rewards. Certificates, Leaderboards, shout-outs at Summits, Leadership Events.  And in the spirit of Planned Acts of Kindness, everyone that completes a cycle receives a little something extra from PAK.

Please don’t forget to do your bonuses … ‘cause they have their own Karma Rewards!

Once you successfully finish a cycle you’re welcome to start another right away. Complete it in 90-Days? Shoot for 60. Do it as a Champion? Go for Back to Back Victories! Become the Elite of the Elite with the opportunity to volunteer directly with PAKs Founder, Lyle Benjamin, on special initiatives involving your passion and PAK programs.

Congratulations on taking the first step in helping support PAK’s “2023: The Year of One Planet One People” movement. Spread the news 5x on Social Media posts. Be sure to add in our web address: PlannedActsOfKindness.Org

Be the change you want to see. Make an action statement. How many Planned Acts of Kindness will you pledge to do in 2023? Maximum is seven weekly. Multiply your number (say 4) by 50 and 200 is your answer. Record your pledge on our site and spread the news 5x Social Media.

Read The Karma Constitution under the Mission menu tab on PlannedActs.Org. Add your name to the list of supporters and ask others to do the same. Share 5x during the day on Social Media (dtd-SM).

Civility Challenge Pledge Video: “I hereby make a PAK to treat others with respect & kindness & to go through life from this day forward acting towards others as I would wish to be treated myself. This is (your first name) in (city, country) for PlannedActs.Org and One Planet One People.”  Share 5x during day on Social Media.

What’s free and gives you a warm buzz when you participate? You got it. So sign up today in PAK’s Karma Club and start hitting your monthly achievement goals. Do two of the four daily Karma Club achievements to earn your credit: Daily PAK, Engagement, Volunteering, Support.

Share a video story of how a Planned Act of Kindness changed your life; whether it was something you did for someone else, or someone else did for you. At end of the video, say your first name, city, coun- try & PlannedActs.Org. Share 5x during day on Social Media. Send to PAK via email or social media. Our Kindness Shared Stories YouTube Channel

PAK’s mission is to provide Quality of Life for millions of people all over the world regardless of nationality, race, religion, gender, age, health, education or income. To accomplish this we need your help: Volunteer a couple of hours & inspire people to join the Karma Club! Social Media share.

What do you think is a major problem in the world and what needs to be done to help solve it? This is such an important question, yet how few of us are ever asked. Well, we’re asking & we feel your answer is so important we want it on video. You know the drill, add info, share 5x. Send in to PAK via email or social media. Check the major problems of the world Youtube Channel.

List the different languages people you know speak & ask them to take the PAK Kindness Pledge in that language. Record it along with their first name, where they are from (learned the language) & Plan- nedActs.Org. We’ll add it to our on-line One Planet – One People World Map! Send in to PAK via email or social media.

Completing your Engagement Survey is a great way to provide PAK with a brain boost. You know a lot. And we know we got a lot to learn. So what better place can there be but learning from you? So please share & be as detailed as possible. We really do want to know. Thank you!

Just as it takes all the vowels working to- gether to make words flow, it takes all of these — Outreach, Engagement, Inspira- tion, Action & You — working in concert to make things happen on a larger scale. Introduce PAK programs to your school, church/temple, org, company. Share w/ us

Are you a connector? An influencer? Or just someone that wants to make things happen in a big way? Pick 3-5 big names: Celebs, athletes, musicians, politicians, business leaders, the Pope. Reach out on Social Media with a personal story about PAK & ask them to share on their Social Media.

16 problems we face on subjects (like Sustainability or Kindness) & two ex- perts per problem that explain why & what we need to do to fix each problem. Books used in 8-12 week peer work- shops to build quality relationships & strengthen community. Share 5 libraries.

Whether you’re an individual engaged on the grassroots level or in a group, PAK’s Sustainability Program is designed to help you make a difference. Compete in 16 action areas, get recognized, earn re- wards. Learn more on-line. Recommend to 3-5 clubs, teams, schools, orgs, corps.

Think about something you do profes- sionally or personally that you enjoy. Now, how would you apply that as a PAK volunteer? Spend some time brainstorm- ing & 4-6 implementing. Then drop us a detailed note with what you’ve done. We’d love to hear about it & see results!

“BE THE HERO” VOLUNTEER

OnePlanet-OnePeople.Com: The world is in crisis: climate change, pol- lution, pandemics, terrorism & war. In 10- 20 years the tipping points won’t matter, they will have already passed. Be the hero & partner with people around the world to save humanity as you battle for the survival of the human race. Share 5x SM.

TheWorkingDead.Us: Learn financial literacy & planning based on tax code set up by the rich for the rich. How Custom Benefits Plans provide Safety, Growth, Protection & Penalty-Free & Tax Free withdrawals at any age. Key to financial planning not how much you make, but how much you keep. Share 5x SM.

Get four or more of your family, friends, co-workers or classmates together and start a “One Planet-One People” Club. Do in your club, community, workplace, team, org., church/temple, school or your social media community. “If we want to see a change, the change starts with us.”

“Host & Post” Daily PAKs to spread kindness to your audience & in return PAK shares your logo, name & link. En- hance your goodwill, grow your audience & better the world. All you need is a website, media presence or audience. You can record daily PAK videos. Share on SM.

In 2020, PAK plans to host Summits in NY, DC, Beijing, New Delhi, Rome & other cities to engage, educate & inspire people to action around the world. Vol- unteers are needed from all over the world. Help spread the world on SM & get others involved. #Itsourplanet